Song In Focus : Girl in the Mirror
Artist : Bebe Rexha

There is a perfect image set by the society – of your appearance / your looks / your behaviour – and you’ve to act according to it.

If you don’t fit the bill, you’re always anxious of your looks and that converts into constant thoughts in your mind – which tire you and weigh you down.

This song is a perfect example of this – it’s a song about self-acceptance – it tells you to be you, be yourself and stop trying to be like everyone else.

Songs are always inspirational, and if it teaches a good lesson along with some good music – then, go for it.

Listening to the song makes you think that someone is sharing their story through the song, which may be true, but it definitely has a deeper meaning to it.

It portrays the pain in every person’s life and the experiences that one gets to learn from those pains.

Every experience makes you look at things differently, changes you a little, and at the same time, makes you better than before.

This doesn’t mean one should look for more pains in their lives, but it means that instead of looking at the negative aspects in those situations, look at the positive too – when if you wouldn’t have experienced that, you wouldn’t have learnt something at all.

Give it a listen and see whether you can relate to this lesson or not! #WhatSongsTaughtUs 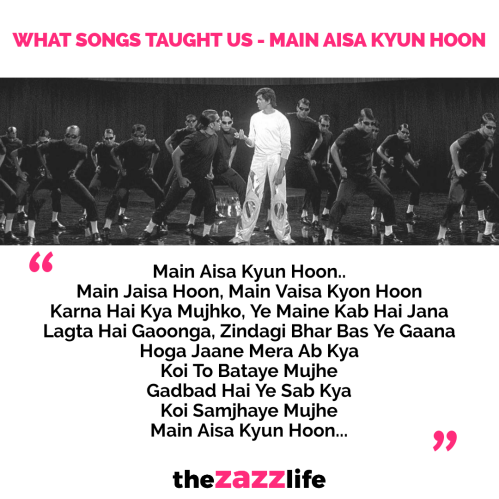 Most of us, in our daily lives, are asked what’s next, what’s the next step, what decision have you taken for the future!

Some hurriedly take a decision, some leave it up to others!

And then, there are some who don’t have an answer. They ask themselves, why are they like this? Why don’t they know what to do? Is something wrong with them? These are the questions they surround themselves with!

You can be patient, maybe experiment with different things, become self aware of who you want to be, not to hurry with your future or even if you decide on something, it’s okay to change and decide something else later on!

People don’t say this stuff, may be even the song doesn’t convey this directly, but we would like to, through this post!

Are you able to relate with this?
#WhatSongsTaughtUs 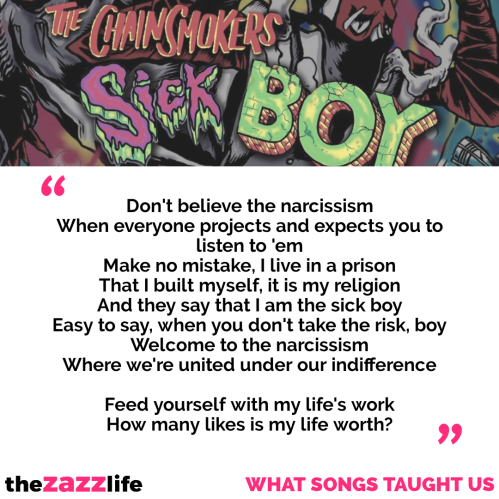 According to the artists, “Sick Boy” is a reflection of their generation and the struggles with finding identity on social media.

Drew said: “This song is kind about discovering your self-identity while living in a world where everyone posts everything they do and projects kind of a curated reality on Instagram. And that’s how we interact with one another.”

A lot of people front themselves on social media, and are living two identities, the real one and the virtual one. To garner followers and likes, they’ll portray any image they want to and post whatever gets them that engagement.

The wise thing is to beware of the fake ones and not be influenced by what they say. There are some authentic ones too, so it’s not all bad!

However, be self-aware and do what you’d like to, or want to, and not be influenced by someone else and form your own identity, at the end.

Don’t doubt yourself, and don’t anticipate people’s opinions on the actions you haven’t taken yet.

A beautiful, enthusiastic and soothing song about Life.

Life is short, then why do we keep worrying about the tiniest of things, why do we stress about the unnecessary stuff in our life?

This stress, this worrying has a negative impact mentally, and as the song says, you’ll die even before dying because of it.

Stop over thinking!
Stop stressing about the things that aren’t in your control!

With every breath we take, in every moment of our lives, there’s change.

So, every year, every month, every day, every hour, every minute, live life to the fullest because you don’t know whether there’s a tomorrow.

Song In Focus : Wake Me Up
Artist : Avicii

The song, Wake Me Up, an Avicii classic is a beautiful rendition of a young, inexperienced soul wanting to live a happy life, wanting to just start, wanting to experience the journey, not caring about how the journey will end.

The young soul was living his dreams, not knowing he was lost, as told by the people around him, who persisted to take the safe path, to do safe things and not wander around.

People around him say that he is inexperienced, that there is a difference between life and dreams, that life will pass him by, filled with regrets of not settling down.

And the young, inexperienced soul wanting to live his dreams is fine by it, he is ready to take the chance, because in the end, he’s happy with the decisions he’s taking, and he wants to experience the life as is. 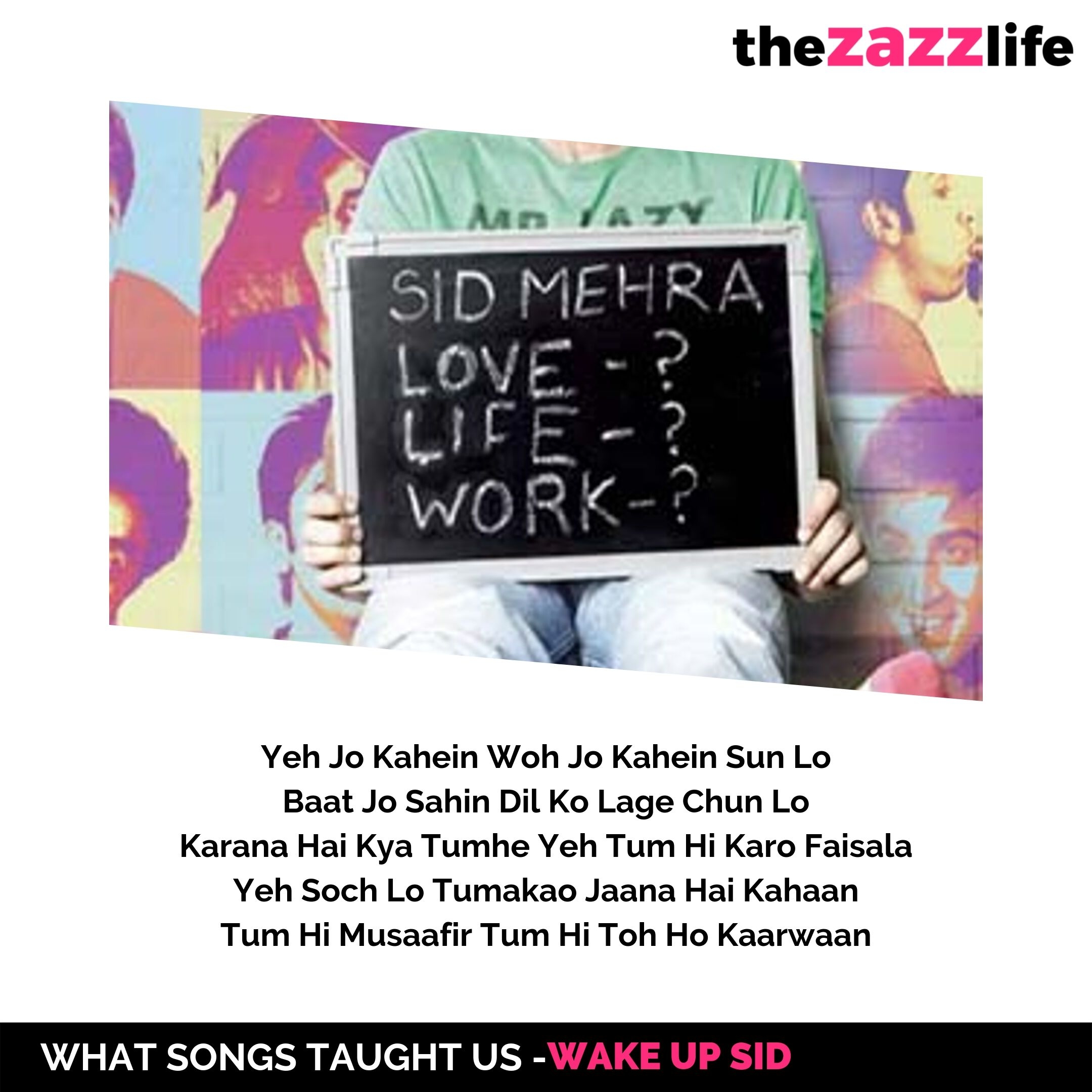 The title song of the movie Wake Up Sid is a song for all of us, it’s such a positive pumped-up song which not only is motivating for the lead character in the movie, but for us too.

It’s time to wake up and do! Let your present be better than your yesterday! You’ve got one life so why not make the most out of it, cry or laugh but fill it with colours.

Let everyone around you talk, opiate and judge, but you do what you want to do. What you feel is right, for you.

Decide where you want to go, decide what you want to be and set your path for yourself. You’re the traveller in your journey, as well as the driver.

So, it’s time to wake up and just do!

What beautiful lyrics, till date you can listen to this song ‘n’ number of times and with such a beautiful meaning behind it, why not learn from it too! #WhatSongsTaughtUs

It’s a motivational song, with positive vibes. The words are full of energy and increases your morale when you listen to it.

The song is a voice raised against the system, the words for every individual for ourselves and for others, that we shall stand, we shall rise and we shall succeed. Our time will come!

There’s no fear in our hearts, but determination accompanied with constant hard-work and efforts towards the dreams that shall bring success.

And there’s no stopping us! With hard-work, we shall remove all obstacles and achieve our dreams with our own hands without any support.

• What Songs Taught Us •
⠀⠀⠀⠀⠀⠀⠀⠀⠀
Song In Focus : No Regrets
Artists : @kshmr @krewella @yves_v
⠀⠀⠀⠀⠀⠀⠀⠀⠀
🎵But I don’t wanna sacrifice the little things
That make life worth living, life worth living
So I roll like a stone
Hands up in the air (Hey)
I don’t wanna care
And I’ll die with no regrets🎵
⠀⠀⠀⠀⠀⠀⠀⠀⠀
Have you heard this inspirational track from KSHMR, Krewella and Yves V?

Such a beautiful track with lyrics that can be heard a million times, with a positive impact on life.

Often, to chase the big goals we have in life, we overlook the tiny, micro elements of our life. Something we would have cherished and enjoyed, but yet overlooked for the ‘to be achieved’ greater goals we have thought of.

How often have we stopped and been grateful to what we already have, what life has to offer and just enjoy these beauties.

Living a life with no regrets, whatsoever!

You are in love with the process, the day-to-day, living life to the fullest, accomplishing and enjoying every small thing in life, thus having no regrets of having missed anything.

Thank you for this song and the wonderful message that it is trying to send. 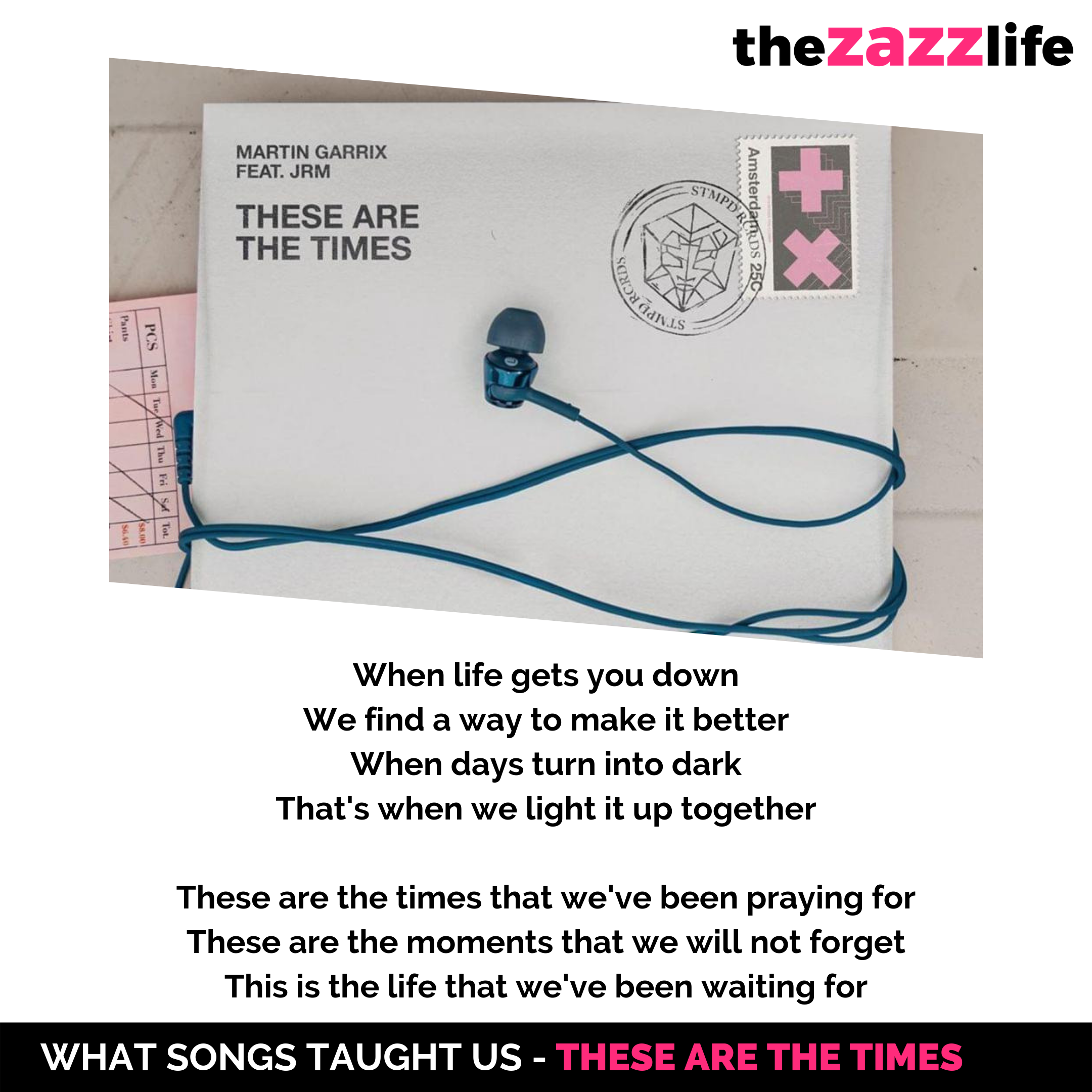 • What Songs Taught Us •

Song In Focus : These are the Times by Martin Garrix ft JRM

There will be days when you’d feel down, the days will be dark, but life gives you the chance to turn it around.

That’s what life is about, the opportunities to turn circumstances around the way you want it to.
⠀⠀⠀⠀⠀⠀⠀⠀⠀
“The empowering lyrics focus on being thankful for the life we’re given and finding a way to turn around the darker times.”
⠀⠀⠀⠀⠀⠀⠀⠀⠀
//Have you heard the song yet?